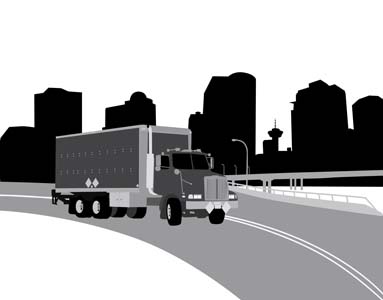 Have you been involved in a commercial vehicle accident?

The obvious difference between an accident involving commercial vehicles and those involving semi-trucks is the size and weight of the vehicle. The maximum weight for a U.S. semi-truck and full trailer is 80,000 pounds. When you have these enormous trucks colliding with other vehicles at high rates of speed, the force of impact becomes astronomical and often deadly.

Commercial truck drivers often drive for extended periods of time, and there are certain protocols and requirements they must follow in order to be safe. If they become overly tired, they become a very dangerous hazard on the road.

Through our years as truck accident attorneys, handling many of these cases, and hiring experts in this field, we know the arguments to make. Some of these guidelines include:

Because of the great risk of danger when one of these commercial vehicles is involved in an accident, the companies that own the vehicles make sure they cover themselves with very high policy limit insurance. In fact, most insurance companies require such. For instance, most providers offer just one liability limit. The limit is called a “combined single limit.” Some companies’ lowest limits start at $100,000.00 and go up to millions of dollars. The standard limit is $1,000,000.00.

If you’ve been involved or know someone that has been hurt in a commercial truck accident, we can help. You must prove that the truck driver was negligent in some way, shape, or form. Some of the examples above show when a driver has been negligent, and we are experts in Negligence law. Let our expertise guide you through this process.

For more, read our blog on commercial trucks!

Sometimes, the owner of the commercial trucking company could be liable for his driver’s negligence, due to lack of maintenance and service for his or her trucks. We handled a recent case where a driver was involved in a terrible accident when his brakes gave out. He basically had to orchestrate a crash landing and avoid other vehicles on the road as he maneuvered the truck. He was on a freeway and heading downhill when the brakes gave out. He reached high rates of speed and was headed for a sure disaster. He tried to turn into a center divider and this caused the truck to slow down. However, it also caused the truck to roll over on its side and slide to a complete stop. Luckily, he did not hit any other vehicles.

Don't Wait Until It's Too Late