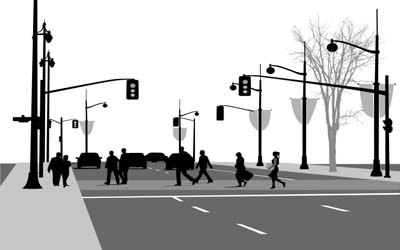 Pedestrians have the same rights to compensation as motorists that are involved in an accident. Pedestrian accidents are sometimes caused by other dangerous conditions, such as tripping hazards on the streets and sidewalks. All in all, pedestrians must prove that the party responsible for the accident caused their injuries. As a personal injury law firm, we have handled numerous pedestrian accident matters with great results.

It’s also important for parents to protect their children. In 2012, more than one in every five children, between ages 5 and 15 who were killed in traffic crashes, were pedestrians. (NHTSA).

When hiring a pedestrian accident attorney, you must make sure they have handled your type of case before. Pedestrian cases are unique in the fact that there are many issues involved concerning vehicle and traffic code sections. We have handled many cases in this realm of negligence law, just to name a few:

In these types of cases, it is very important to hire the right injury lawyer to prove your case. Because we have been doing this for so long, we know the top people in the industry of accident reconstruction. We also know the top medical experts who will testify in your trial and explain to the jury what your injuries truly are and what their effect will be in the future.

If you’re a pedestrian that’s been struck by a car or involved in another type of accident, please contact Halpern & Associates in Los Angeles today.

Don't Wait Until It's Too Late